Exhibition: “A billion eyes for a billion stars”

Pre-doctoral and post-doctoral researchers of the Gaia UB research team, from the Institute of Cosmos Sciences of the UB (ICCUB-IEEC), offer guided visits to the exhibition “A billion eyes for a billion stars”. They will describe the technological challenge represented by the Gaia mission, which aims to know better the origin, formation and evolution of the Milky Way. A team composed by forty UB researchers and engineers participate in the mission together with scientists from the European Space Agency (ESA). Undoubtely, the Gaia mission will open the doors of scientific knowledge to future generations.

This outreaching activity is organised to celebrate the first anniversary of the launch of the satellite Gaia and within the international congress “The milky way unravelled by Gaia“, hosted by the UB. Several science dissemination activities, addressed to secondary and upper secondary students and the general public, take place from 1 to 5 December. 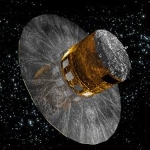