How can we avoid kelp beds turning into barren grounds?

Urchins are marine invertebrates that mould the biological richness of marine grounds. However, an excessive proliferation of urchins may also have severe ecological consequences on marine grounds as they reduce algal cover and affect the survival of other marine species. To explore global dynamics and the factors that turn kelp beds into barren grounds is the main objective of a new study published in the journal Philosophical Transaction of the Royal Society B. The paper is signed by researchers Bernat Hereu and Mikel Zabala, from the Department of Ecology of the University of Barcelona (UB); Emma Cebrian and Enric Ballesteros, from the Centre for Advanced Studies of Blanes (CEAB-CSIC); Joaquim Garrabou, from the Institute of Marine Sciences (ICM-CSIC), and José Carlos Hernández and Sabrina Clemente, from the University of La Laguna (Canary Islands). Research centres from Australia, Canada, United States, South Africa, New Zeland, Japon, Chile and Norway also participated in the study. 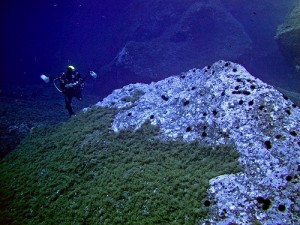